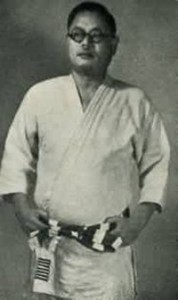 Mikonosuke (Mikinosuke) Kawaishi (born 1899 – 1969) was a master of Japanese Judo and Jujutsu, reaching for the life of the 7th Dan, who led the development of Judo in France and much of Europe. The application of belt colors associated with different degrees of learning resulted in a very effective teaching approach for the development of martial arts that was later used in most of the world and other martial arts and sports. By the Fédération Française posthumous judo and jiu-jitsu gives him the 10th Dan.

Kawaishi born in Kyoto in 1899 and having studied Judo and Jujutsu at the Dai Nippon Butoku Kai (Greater Japan Association of Martial Virtue). He left Japan in the mid-1920s to travel and see the world and began by touring the United States of America, teaching jujitsu particularly in New York and San Diego. By 1928 he had arrived in the United Kingdom and soon established a school in Liverpool and with his close friend Gunji Koizumi (nearly 10 years his senior) was now well established in the UK having formed the London Budokwai Club and a school at the famous Oxford University.

In 1931, he moved to London where he founded the Anglo-Japanese Judo Club and also began teaching Judo at Oxford University with Kouzumi. With the Asian martial arts still relatively new to England, he was forced to supplement his meagre earnings as a teacher by becoming a professional wrestler. For this purpose he assumed the stage name of “Matsuda”, and soon he was taking on wrestlers and boxers in the ring and on stage in music halls. In that latter part of 1931 he returned to Japan for a short time, and it was during this trip that he renewed his association with Professor Jigoro Kano, who awarded him with a third Dan in Kodokan Judo.

In 1936, then a Kano fourth Dan, Kawaishi moved to Paris where he was commissioned to teach Jujutsu to the French Police. It was at this time, that he opened the first public school of Jujutsu in a small yet humble dojo in the Latin Quarters of Paris. Unfortunately with the unpleasant events of World War II looming, Kawaishi made an attempt to return to Japan, but he was imprisoned in Manchuria for a time. Following the end of the war and his subsequent release, he returned to Paris to continue with his teaching. In 1947 Kawaishi joined forces with Kouzumi to promote the first ever-recorded Judo International tournament between two countries (UK and France). This became known as the Kawaishi Cup, with the prestigious medal bearing his name being awarded to the division winners only. With Moshé Feldenkrais founded the French Federation of Judo in the 1947, becoming the technical director for many years. Kawaishi died on the January 30, 1969, and his body was laid to rest in Plessis-Robinson, Paris.