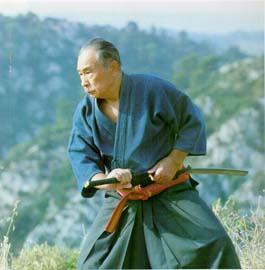 Mochizuki, began by training in kendo at the age of five, at his grandfather’s dojo in Shizuoka. Then he began Judo and joined the Kodokan in 1925 where he became an outstanding competitor. Under the tutelage of Jigoro Kano, the founder of judo, Mochizuki became the youngest member of the Kobudo Kenkyukai – an organization for the study, preservation and development of classical martial arts – established within the Kodokan. Here he practiced among others Katori Shinto-ryu. In 1930, he was sent by Jigoro Kano to study aikijujutsu with Morihei Ueshiba. He was the uchideschi of Morihei Ueshiba at the Kobukan dojo for one year before opening his own dojo in Shizuoka City in 1931.

He was awarded two Daito-Ryu scrolls by Ueshiba in June 1932 (“Goshinyo no te” and “Hiden ogi no koto”). He spent eight years in Mongolia where he was named Second Governor. In Mongolia, he was also active as an educator and entrepreneur of projects to improve communications and irrigation. His idea of combating communism with the application of the principles of “mutual welfare and prosperity” and of “the best use of energy” of Jigoro Kano contributed to the development of his region. His irrigation project was completed after the Second World War by the Chinese authorities. Minoru Mochizuki was the first to teach aikido in the West when he traveled in France from 1951 to 1953 as a judo teacher. He taught at his dojo of Shizuoka until nearly the end of the last millennium and spent the last years of his life in France with his son Hiroo.