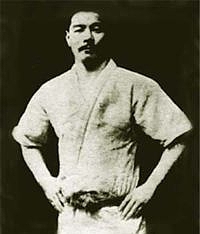 Born in November of 1878, and trained by Jigoro Kano and Tsunejiro Tomita in Judo, Mitsuyo Maeda (aka Conde Koma) is, perhaps, the most important figure in the history of Brazilian Jiu-Jitsu. He began his Judo (then known as Kano Jiu-Jitsu) training in 1895 and was traveling the world to promote the art by 1904. He took on many exhibition bouts to prove the effectiveness of his Judo. Maeda’s journey took him to America, England, Spain, Central America and Brazil.

He took on many challenge matches and performed many demonstrations.  But it was a demonstration at the Teatro da Paz in 1917 that would foster the beginning of Brazilian Jiu-Jitsu. 14 year old Carlos Gracie had watched this demonstration and he wanted to train with Maeda.

Maeda did, in fact teach young Carlos Gracie in return for his father’s (Gastao Gracie) assistance in setting up a Japanese colony in Brazil. The arrangement was made and an unstoppable force was set into motion. Mitsuyo Maeda passed away as a 7th degree Judo black belt in November of 1941.