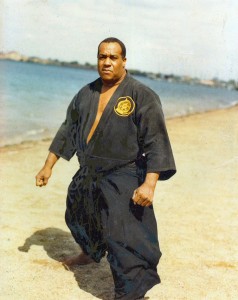 Dr. Moses Powell was a Martial Arts “living legend” with more than 47 years of consummate study in the fighting arts. His experience and achievements are countless and his name is world-renowned.

In 1965, Dr. Powell was the featured martial arts demonstrator at the New York World’s Fair. The following year in 1966, he was the first martial artist to receive The African Benign Arts Award. Between 1967 and 1968, Dr. Powell pioneered his craft by traveling overseas to the Caribbean. There, he introduced Sanuces Ryu Jiu Jitsu to the island of Jamaica and Trinidad and to Bermuda in the early 1970’s. Dr. Powell was inducted into the International African Arts Festival’s “Living Legend” Award, and was the first African-American to teach the fighting arts to law enforcement agencies around the world.

In January of 2003, Dr. Powell said, “I have been called the Pioneer, the Missionary, and the Lumberjack of Martial Arts. When I think about it, I’d like to be remembered as the man I am…Moses Powell. It’s not about making yourself anything; but it is about earning your rewards as you go along. Remember, there is no such think as a book master, you have to fight in the trenches or on the mat…I want young people to realize that there is a history to look up to, and a path of greatness to follow and further pave.”

Dr. Moses Powell was born on January 13, 1941 in Norfolk, Virginia to Athenia and Moses Powell, and passed away on January 22, 2005 due to respiratory failure.