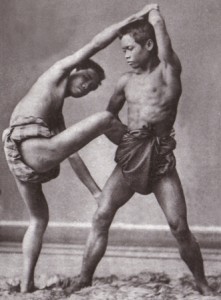 Muay Boran (“ancient boxing”) is an umbrella term for the unarmed martial arts of Thailand prior to the introduction of modern equipment and rules in the 1930s. It is thus the direct ancestor of modern Muay Thai.

The word muay which means “boxing” comes from the Sanskrit term mavya, while boran or boraan means “ancient” in Thai. Muay Boran is not a single style but acts as an umbrella term for all traditional Thai styles of Indochinese kickboxing. Whereas Muay Thai is often called the “science of eight limbs”, muay boran is said to make use of nawa awut which means “nine weapons”, adding headbutts as ninth offensive in addition to the “eight limbs” of hands, legs, elbows and knees used in Muay Thai. [1]

It is no surprise then, that Muay Boran is a much more brutal and effective martial art than Muay Thai. In fact, Muay Thai only came about when rules were applied to Muay Boran and made into a sport because of the serious and sometimes fatal injuries that resulted during bouts.

The techniques used in Muay Boran focus on efficiency and maximizing the amount of damage from each blow. The aim is to neutralize the enemy as quickly as possible because another might be close by ready to strike. Apart from hands and legs, elbows and knees are also used to deliver devastating blows which can quickly incapacitate or even kill and opponent. [2]