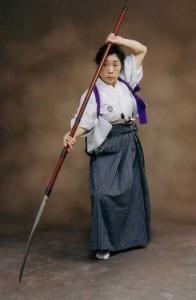 Naginatajutsu is the Japanese art of wielding the naginata, a weapon resembling the medieval European glaive or guisarme. Most naginata practice today is in a modernized form (gendai budō) called the “way of naginata” (naginata-dō) or “new naginata” (atarashii naginata), in which competitions are also held.

This has led to the impression overseas that naginatajutsu is a martial art that was not used by male warriors. In fact, naginatajutsu was developed by the warrior monks of early medieval Japan and was widely used by Samurai.