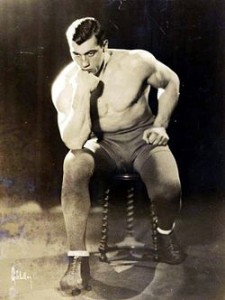 Primo Carnera (October 26, 1906 – June 29, 1967) was an Italian boxer, nicknamed the Ambling Alp, who became the world heavyweight champion. Born in Sequals, then in the Province of Udine, now Province of Pordenone, Friuli-Venezia Giulia (Italy), Carnera was a remarkable 205 cm, tall and weighed 284 pounds (129 kg), at a time when the average height in Italy was approximately 5 ft 5 in (1.65 m).

Until December 19, 2005, when the 7 ft 1 in, 147 kg Nikolay Valuev won the WBA title, Jess Willard who stood 6′ 6½” was the tallest champion in boxing history. Carnera was an inch shorter but around 40 lbs heavier and was the heaviest champion in boxing history. He enjoyed a sizable reach advantage over most rivals, and when seen on fight footage, he seems like a towering giant compared to many heavyweights of his era, who were usually at least 60 pounds (27 kg) lighter and 7 inches (18 cm) shorter than he was.

One publicity release about him read in part: “For breakfast, Primo has a quart of orange juice, two quarts of milk, nineteen pieces of toast, fourteen eggs, a loaf of bread and half a pound of Virginia ham.” Because of his size, he earned the nickname “The Ambling Alp.”