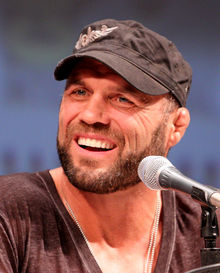 Randy Duane Couture (born June 22, 1963) is a retired American mixed martial artist, Greco-Roman wrestler, actor, a three-time former heavyweight champion and a two-time light-heavyweight champion of the Ultimate Fighting Championship. Couture is the first fighter to hold two UFC championship titles in two different divisions (heavyweight and light heavyweight). Couture has competed in a record 15 title fights. He also holds the most title reigns in the UFC with five. His last fight with Lyoto Machida put him in a tie with Matt Hughes in having the highest number of fights in the UFC at 24. Couture is one of the first members of the UFC Hall of Fame and many consider him to be one of the greatest in MMA history.

Couture is generally recognized as a clinch and ground-and-pound fighter who uses his wrestling ability to execute take downs, establish top position and successively strike the opponent on the bottom. Couture has also displayed a variety of skills in Boxing, and Brazilian Jiu-Jitsu; submitting three opponents using different chokeholds. Couture is the only athlete in UFC history to win a championship after becoming a Hall of Fame member and is the oldest title holder ever (in the UFC and MMA). Along with Chuck Liddell, Couture is widely credited for bringing mixed martial arts into the mainstream of American sports and pop culture.