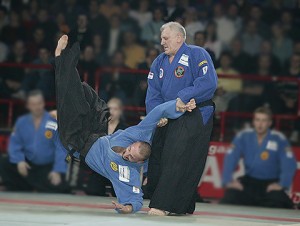 Real Aikido is a martial art developed by Ljubomir Vračarević, a self-defence instructor from Serbia. It is a mixture of aikido, and jujutsu techniques, with some modifications made by Vračarević.

The Real Aikido defense system includes unarmed techniques, as well as defense against weapons such as knife, pistol, etc. It includes Aikido/Jujutsu techniques simplified so that they can be easily taught in security and self-defense courses. The curriculum itself is mainly based on a general Aikido curriculum, with a kyu/dan system of grading. Apart from grappling, self defense against strikes also includes evasion and some blocking techniques.

Vracarevic’s bodyguard school is officially certified by the International Bodyguard and Security Services Association (IBSSA). From 2005 Real Aikido was included in elementary school curriculum in Serbia as an elective subject.