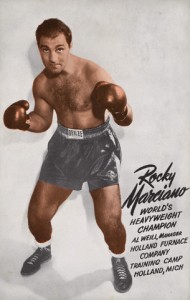 Rocky Marciano is one of the hardest punchers ever who’s biggest claim to fame is being the only undefeated Heavyweight champion. Marciano wasn’t that smooth as far as finesse is concerned, but he made up for it by punishing his opponents with power.

There’s been a back and forth Marciano debate for decades. Some people call him the greatest. However, Marciano is never ranked high amongst the greatest by boxing analyst despite being undefeated. You’ll need to look no where else to understand why. His less than stellar rankings are primarily because the competition he faced wasn’t as strong as many of the other champions like Ali or Robinson. Ali and Robinson beat many other all time great Hall of Famers you might find on similar lists, and while these fighters were in their prime. Simply being undefeated can be easily nullified. Many of the boxing greats were also once undefeated boxers for long periods of time. Willie Pep was once 61-0. Sugar Ray Robinson was 85-0 as an amateur and once 40-0 as a pro. It’s only when these warriors fought other legends, took losses, and reasserted their dominance did people learn how good they were and earned their places in boxing history.

Most of the biggest names Marciano fought were passed their prime and weren’t great litmus tests. Marciano took the Heavyweight title from a 38 year old Jersey Joe Walcott. He also famously knocked Joe Louis out of the ring, but Louis was obviously not the same Louis, old, weathered and forced to keep fighting because of debt. Robinson had Jake LaMotta and beat him. Ali had Frasier and Foreman and beat them. Unfortunately and to no fault of his own, Marciano won all his fights and never had a fresh legendary nemesis to prove his worth with an exclamation point.

Regardless, Marciano will always be remembered for his ferocity and no losses. He was a class act who never took more credit than he deserved. Being the only undefeated Heavyweight champion of all time will keep him relevant in boxing debates and rankings for a very long time.