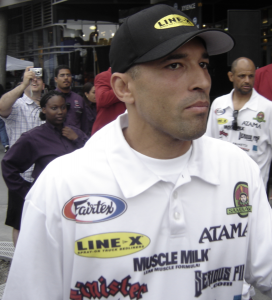 Royce Gracie (born December 12, 1966) is a Brazilian professional mixed martial artist, a UFC Hall of Famer and Brazilian Jiu-Jitsu practitioner. A legend and pioneer in the sport of mixed martial arts, he is widely considered to be the most influential figure in the history of modern MMA.

Gracie gained fame for his domination in the Ultimate Fighting Championship. He became known for beating opponents much larger than he was, and between 1993 and 1994, he was the tournament winner of UFC 1, UFC 2, UFC 4, and fought to a draw with Ken Shamrock in the championship match in the Superfight at UFC 5.

Gracie popularized Brazilian Jiu-Jitsu and revolutionized mixed martial arts with his results contributing to the movement towards grappling and cross-training in the sport. He holds the most submission victories in UFC history with 11, which he earned between UFC 1 and UFC 4.