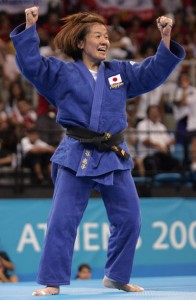 Ryoko Tani (born September 6, 1975) is a japanese female judoka. She is one of the world’s most famous and successful judoka.

She is commonly known as ‘Yawara-chan’or ‘Tawara’ (from the title character of Yawara!, a popular judo manga). Since she won the International Women’s Judo Championships in 1990, ‘Yawara-chan’ has gone on to win the event every year. She has a record seven world titles and she brought home the 48 kg-category gold medal from Sydney Olympics in 2000 and the Athens Olympics in 2004.
Her 84-match winning streak was finally broken in 1996 by North Korea’s Kye Sun Hui. She holds a fourth dan.

In Beijing in 2008 Tani, who had not been beaten in a major international competition since the Atlanta Games in 1996, saw her hopes of a third-straight gold evaporate when judges awarded penalty points to Romania’s Alina Dumitru after both competitors failed to show much aggression. Looking stunned, Tani fought desperately after the final controversial penalty call, but with only seconds left she had no time to mount an attack.

She defeated Russia’s Lyudmila Bogdanova for bronze. She gained her fifth Olympic medal with the bronze. Along with Cuba’s Driulys González and Australia’s Mária Pekli, Tani became in 2008 the first female judoka to compete at five Olympics. The only other judokas to compete at five Olympics are Belgian Robert Van de Walle and Puerto Rican judoka-bobsledder Jorge Bonnet.