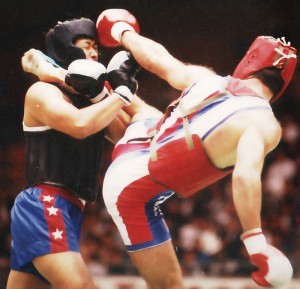 Sanda (Sanshou) literally “free fighting”) or an “unsanctioned fight” is a Chinese hand-to-hand self-defense system and combat sport. Not seen as a style itself, rather it is considered as just one of the two components of Chinese martial arts training and is often taught alongside taolu (forms) training. However, as part of the development of sport wushu by the Chinese government, a standard curriculum for sanshou was developed. It is to this standard curriculum that the term “Sanshou” is usually applied.

This curriculum was developed with the Chinese military experiences in close range and hand to hand combat with reference to traditional Chinese martial arts. One can see Sanshou as a synthesis of traditional Chinese fighting techniques into a more amorphous system and is commonly taught alongside traditional Chinese styles which Sanshou techniques, theory and training methods are derived from. The emphasis of Sanshou is on realistic fighting ability.

As an unarmed self-defense, close combat system, Sanshou includes ti (kicks), da (punches), shuai (Shuai Jiao), and na (Chin Na). Sanshou as a sport has a very great emphasis on throws. One of its most distinguished techniques is the “kick catch”. This is when one person kicks and the person performing the throw catches the kick and then trips the person kicking when he’s on one leg.