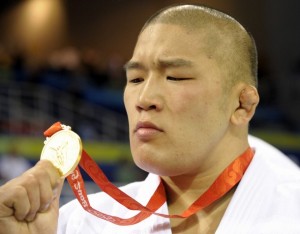 Satoshi Ishii (born December 19, 1986) is a Japanese judoka and mixed martial artist noted for winning a gold medal in Olympic Judo at the 2008 Summer Olympic Games in Beijing, China, a silver medal at the 2006 Asian Games and two All-Japan Judo Championships. Ishii made his professional MMA debut at Dynamite!! 2009 losing to fellow Judoka gold medallist Hidehiko Yoshida by unanimous decision.

On August 15, 2008 he won a gold medal at the +100 kg category of the 2008 Summer Olympic Games in Beijing, China. On 30th April 2011 Ishii returned to Judo to play the United States Championship in the open division; he won all the matches, securing the gold medal.