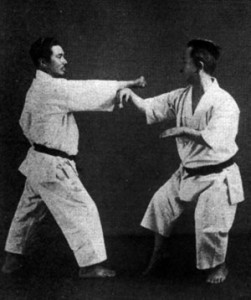 Shito Ryu Karate-do is probably the most popular form in West Japan. It was founded by Kenwa Mabuni who studied under Yasutsune Itosu. Mabuni also later studied under Kanryo Higashionna and later named his style of karate the Shito style, taking the first characters of each of his teacher’s names. ‘Shi’ is the one of the Japanese readings for the character meaning “string” which is the first of the two characters which make up the name “Itosu”. “Higashi” is the first character of Master Higashionna’s name, which can also be read “to” in Japanese as it is in the characters for Tokyo. Master Mabuni combined them to get “Shito” as the name of his style.

Kenwa Mabuni (1889-1952) brought his style of karate to Osaka in 1929 and concentrated on teaching it in universities in West Japan. Another major figure in Shito-ryu karate is the present head of the Itosukai branch of Shito-ryu, Master Ryusho Sakagami born in April, 1915 who founded the Itosukai in 1954.

Shito-ryu karate is characterized by the many katas (forms) which it has. Most practitioners in Japan will have studied more than 20 of them before they reach their first degree black belt, known as “shodan” in Japanese. In addition to kata, a tournament record is also required, together with the ability to best others of lower rank and of the rank aspired to in sparring.

The Shito style uses many short, low stances and the stance known as “shiko-dachi” is common throughout many of the kata. “Shiko-dachi” is a stance similar to that the sumo wrestlers assume when they face off with each other before they put their knuckles to the ground.

The traditional karate weapons: bo (staff), sai, nunchaku, and tonfa are also taught at the higher levels of Shito-ryu karate.