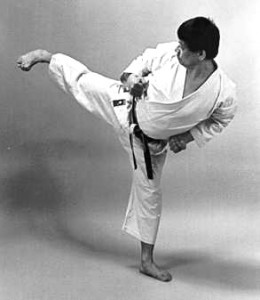 Shotokai is the organisation formed originally in 1930 by Gichin Funakoshi to teach and spread the art of karate. The organization still exists and promotes a style of karate that adheres to Funakoshi’s teachings, in particular the notion that competition is contrary to the essence of karate. Nowadays, the name also designates a formal practice method.

Shotokai is not an official style of karate. Shotokai is the name of the association launched by Gichin Funakoshi originally in 1930. The name derives from Shoto, the pen name which Funakoshi used to sign his poems, literally translated as “pine leaves”. Kai means “group” therefore Shotokai is translated as “Shoto’s group”. Shotokai’s most prominent masters are Gichin Funakoshi with his top students Giko (Yoshitaka) Funakoshi, Genshin (Motonobu) Hironishi and Shigeru Egami. At Funakoshi’s death in 1957, his students split into several factions: on one side there was a group known Nihon Karate Kyokai (Japan Karate Association, JKA) and on another side the Shotokai Association. One of the stumbling blocks between the two groups was the question of whether competitions were to be introduced or not.

Although Shotokai is the name of Shotokan Karate association, it has defined practice method widely known as Shotokai Karate. Shigeru Egami defined the broad outlines of the new way of practising that he developed after having, in a number of tests, discovered the inefficiency of the karate method at that time. After years of research, Egami found an efficient way of striking by executing the movement in a relaxed state of mind and body. This is the basis of Shotokai. It focuses on suppleness and relaxation, as opposed to tenseness that generates force. Elaborating this basic idea, he suggested new forms of techniques and a new way of practising.

Shotokai refrains from the competition Karate because Gichin Funakoshi used to say that there are no contests in Karate. Shotokai is the keeper of Gichin Funakoshi’s Karate heritage and has for example republished his books during the years. It has also kept the art of Shotokan Karate weaponry (primarily bo/kon in Japanese) in practice schedule.