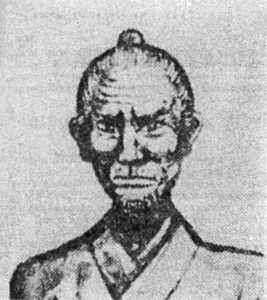 Sokon Matsumura (1809 – 1899) was one of the well-known original karateka of Okinawa. He studied Chuan Fa (Kempo in Japanese) in China as well as other martial arts and brought what he learned back to Okinawa, where he taught a select few students and became a well-known master. He was appointed instructor and bodyguard to the king of the Ryukyu Islands. After Japan assumed full control of Okinawa 40 years later, however, Matsumura Sensei moved to Tokyo and taught and developed karate for the rest of his life.

Matsumura was recruited into the service of the Sho family (the royal family of Okinawa) and eventually became the chief martial arts instructor and bodyguard for the Okinawan King. At some point in his career, c. 1830, he went to China and studied the Shaolin style (Shorin-ryu) of Chinese Kempo (fist method) and weaponry. It is also known that he traveled to Foochow in Fukien (Fujian) Province, China on numerous occasions as an envoy for the Okinawan King, as China was co-ruler of Okinawa along with Japan. After his return from China he organized and refined the Shorin-ryu system of Okinawan Karate (known simply as Te).

Matsumura is credited with passing on the kata or formal exercises of Shorin-ryu Kempo-karate known as Naihanchi I & II, Passai Dai, Seisan, Chinto, Gojushiho (fifty-four steps of the Black Tiger), Kusanku (the embodiment of Kusanku’s teaching as passed on to Tode Sakugawa) and Hakutsuru (White Crane). The Hakutsuru kata contains the elements of the White Crane system taught within the Shaolin system of Chinese Kempo. Another set of kata, known as Chanan in Matsumura’s time, is said to have been devised by Matsumura himself and was the basis for Pinan I and II. Matsumura’s Ryu has endured to the present day and the above mentioned kata are the core of Shorin-ryu Karate today.

Matsumura was given the title “Bushi” meaning “warrior” by the Okinawan King in recognition of his abilities and accomplishments in the martial arts. In fact, Matsumura fought many times and was never defeated. His martial arts endeavors have been the progenitor of many contemporary karate styles: Shorin-ryu, Shotokan, and Shito-ryu, for example. Ultimately, all modern styles of karate that evolved from the Shuri-te lineage can be traced back to the teachings of Bushi Matsumura.