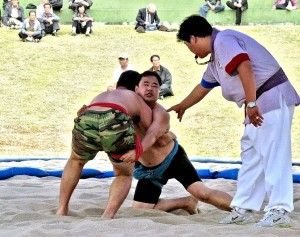 Ssireum or Korean wrestling is a folk wrestling style and traditional national sport of Korea. In the modern form each contestant wears a belt that wraps around the waist and the thigh. The competition employs a series of techniques, which inflict little harm or injury to the opponent: opponents lock on to each other’s belt, and one achieves victory by bringing any part of the opponent’s body above the knee to the ground.

It is important to note the differences between Ssireum and Sumo. Ssireum has remained largely a national/traditional sport. Physical hits such as slaps and blows are not permitted in Ssireum, though they are in Sumo. In both sports, the competitors are often quite large, though Korean wrestlers tend to be leaner. However, size does not guarantee success in either sport. Although both sports are quite similar, they differ in characteristics as well as values.

The national governing body of the sport in Korea, Korean Ssireum Organization, has made a claim that Ssireum is characterized as a “peaceful competition focusing on harmony and unison”, reflecting the “philosophical outlook of the Korean Race”