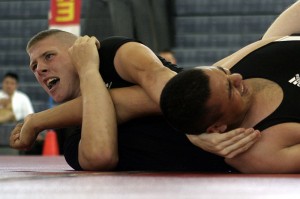 Submission wrestling (also known as submission fighting, submission grappling, sport grappling, or simply as No-Gi) or Combat wrestling in Japan, is a formula of competition and a general term describing the aspect of martial arts and combat sports that focus on clinch and ground fighting with the aim of obtaining a submission using submission holds. The term “submission wrestling” usually refers only to the form of competition and training that does not use a “jacket”, “gi,” or “combat kimono,” often worn with belts that establish rank by color.

The sport of submission wrestling brings together techniques from Folk Wrestling (Catch-as-catch-can), Luta Livre Esportiva, Freestyle Wrestling, Brazilian Jiu-Jitsu, Judo and Sambo. Submission fighting as an element of a larger sport setting is very common in mixed martial arts, Pankration, catch wrestling and others. Submission wrestlers or grapplers usually wear shorts, skin-sticky clothing such as Rash guards, speedos and mixed short clothes so they do not rip off in combat.