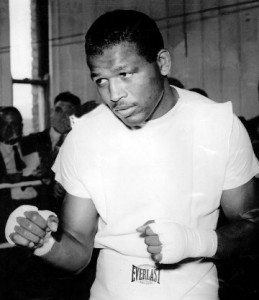 Many consider Robinson to be the greatest pound for pound boxer of all time. Just boxing prowess considered, he might be. Robinson may be the best combination of boxing talent wrapped up in one man that the world has ever seen. He was a freakish enigma who somehow possessed awesome KO power in his punch, lightning fast speed, outstanding footwork and dexterity, and a solid chin. However, I list him 3rd when all variables in making a boxer “great” are considered. Ali and Louis had more international, political and social significance tied into them and their fights, and it immortalized them. Ali and Louis had more fights in which the entire world was a buzz and tuned in. Aside from that, Robinson is high above the rest.

In addition to his superior boxing ability, Robinson was also memorable for his good looks and flamboyance. He walked with large entourages, credited as the first athlete to have an entourage, he owned a famous night spot in Harlem, and he was known to be an excellent singer and dancer. In and outside the ring his presence was large.

Despite being a dance star in France and all the flash, Robinson was clearly the best warrior in the ring. Muhammad Ali and many of the best boxers around all concurred that he was tops.

Robinson won the middleweight championship a remarkable and unprecedented 5 times. Stylistically he had it all. He had speed, finesse, he dished out sound beatings and he could take beatings and rally back in most impressive fashion. He was never out, it was always a matter of how this boxing genius would figure his way out and turn the fight around, and he usually did.

There are many boxer who are always criticized for not being challenged enough by real competition to prove their worth-Robinson isn’t one of them. Robinson has proven he was the best of the best with an exclamation point. Robinson defeated a host of Hall of Fame boxers like Jake LaMotta, Kid Gavilan, and Rocky Graziano. Even 16lbs lighter, Robinson beat the legendary “Raging Bull” Jake LaMotta 5 out of 6 fights. Having a check list of over 8 Hall of Fame boxers he eclipsed cements the fact that Robinson should always make the top 3 on any list.