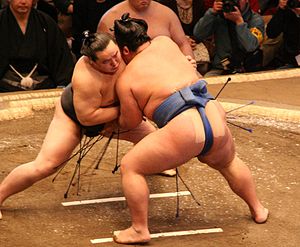 Sumo, considered by many to be Japan’s national sport, has its origins in the distant past. The earliest written records of Japan, which are dated from the 8th century AD, record the first sumo match in 23 BC, occurring specifically at the request of the emperor and continuing until one man was too wounded to continue.

Beginning in 728 AD, the emperor Shōmu Tennō (701–756) began holding official sumo matches at the annual harvest festivals. This tradition of having matches in the presence of the emperor continued, but gradually spread, with matches also held at Shinto festivals, and sumo training was eventually incorporated into military training. By the 17th century, sumo was an organized professional sport, open to the public, enjoyed by both the upper class and commoners.

Today, sumo retains much of its traditional trappings, including a referee dressed as a Shinto priest, and a ritual where the competitors clap hands, stomp their feet, and throw salt in the ring prior to each match. To win a match, competitors employ throwing and grappling techniques to force the other man to the ground; the first man to touch the ground with a part of the body other than the bottom of the feet, or touch the ground outside the ring with any part of the body, loses. Six grand tournaments are held annually in Japan, and each professional fighter’s name and relative ranking is published after each tournament in an official list, called the banzuke, which is followed religiously by sumo fans.