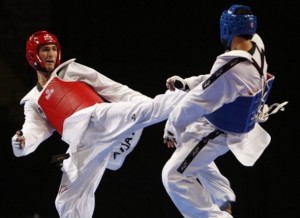 Taekwondo is a modern martial art, characterized by it’s fast, high and spinning kicks. There are multiple interpretations of the name taekwondo. Taekwondo is often translated as ‘the way of hand and foot’. A definition of the name Taekwondo is:

Put this together and Taekwondo means: “The art of Kicking and Punching” or “The art of unarmed combat”. The sport has been founded in Korea and is one of the popular modern martial arts.

Taekwondo is known for its emphasis on kicking techniques, which distinguishes it from martial arts such as karate or southern styles of kung fu. The rationale is that the leg is the longest and strongest weapon a martial artist has, and kicks thus have the greatest potential to execute powerful strikes without successful retaliation. Historically, the Koreans thought that the hands were too valuable to be used in combat.

Taekwondo as a martial art is popular with people of both genders and of many ages. Physically, taekwondo develops strength, speed, balance, flexibility, and stamina. An example of the union of mental and physical discipline is the breaking of wooden boards, bricks or tiles, which requires both physical mastery of the technique and the concentration to focus one’s power.