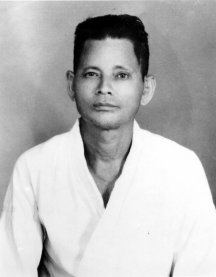 Shimabuku Tatsuo (1906–1975) was born September 19, 1906 in Chan (Jp. Kyan) village, Okinawa. Shimabuku began training under Shinko Ganeku, his maternal uncle. Ganeku later sent Shimabuku to study karate from Chotoku Kyan. He was around age 23 or 24 at the time (c. 1932). Chotoku Kyan would be his most influential instructor (and after whom he initially named his style Chan migwa Te). He also studied karate with Chojun Miyagi in Naha for a couple of years beginning in 1936 and from Choki Motobu around 1938 (also in Naha).

Shimabuku opened his first dojo in Konbu village and began teaching in 1946. On January 15, 1956, he held a meeting and announced that he was naming his new style of karate Isshin-ryu. Shimabuku’s number one student, Eiko Kaneshi, was at the meeting and he asked Shimabuku, “Why such a funny name?” Tatsuo replied, “Because all things begin with one.”

At the age of 50 (c. 1959) Shimabuku began studying kobudō, the art of old traditional Okinawan weapons. The kobudō weapons included were the sai, bo, and tonfa, under Shinken Taira. He incorporated the kobudō that he had learned from Kyan and Taira into the Isshin-ryu system.