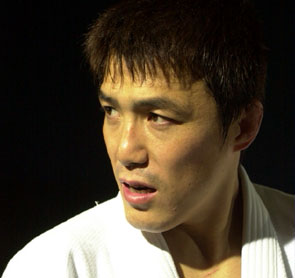 Toshihiko Koga (born November 21, 1967) is a retired judoka who competed in the -71 kg and -78 kg divisions. Koga was born in Kitashigeyasu, Saga, Japan, and began judo in elementary school. He traveled to Tokyo during junior-high school to enter Kodogakusha, a judo school later attended by Olympic gold medalists Hidehiko Yoshida and Makoto Takimoto.

He continued his education at the Nippon Sport Science University, and captured several awards including five consecutive championships at the Kodokan Cup and six consecutive championships at the All-Japan Judo Championships (all in the 71 kg division). He placed 3rd in the 1987 World Judo Championships held in Essen, and was chosen to participate in the 1988 Summer Olympics, where he lost in the 3rd round of the competition. Koga returned to the Olympics in 1992 after winning the 1989 and 1991 World Judo Championships, but seriously injured his left knee during a randori (sparring) session against Hidehiko Yoshida, which prevented him from using his best technique; the ippon seoi nage. He won the gold medal overcoming this injury, and was given the JOC Sports Award by the Japanese Olympic Committee.

Koga briefly retired from competitive judo after his victory at the Olympics, but made his return with a gold medal at the 1995 World Judo Championships in Chiba, Japan. He suffered a surprising defeat by ippon in a qualification match for the 1996 Summer Olympics, but was chosen as the representative anyways because of his past experience in the Olympic games. He ended his third appearance at the Olympics with a silver medal in the -78 kg division.

Koga announced his final retirement from competition in 2000, and became the head coach for the All-Japan women’s judo team. In April 2003, he founded the Koga Juku, a judo school for young children, in Takatsu-ku, Kawasaki. One of his pupils, Ayumi Tanimoto, won the gold medal in the -63 kg division at the 2004 Summer Olympics. He became the head coach of the International Pacific University’s judo team (located in Akaiwa, Okayama) in April 2007, and has enjoyed celebrity status in Japan as a 7th dan rank holder in judo, appearing on several national television shows.