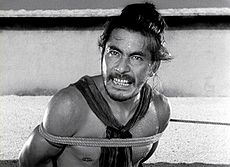 Toshiro Mifune April 1, 1920 – December 24, 1997) was a Japanese actor who appeared in almost 170 feature films. He is best known for his 16-film collaboration with filmmaker Akira Kurosawa, from 1948 to 1965, in works such as Rashomon, Seven Samurai, Throne of Blood, and Yojimbo. He is also popular for portraying Musashi Miyamoto in Hiroshi Inagaki’s Samurai Trilogy.

His imposing bearing, acting range, facility with foreign languages and lengthy partnership with acclaimed director Akira Kurosawa made him the most famous Japanese actor of his time, and easily the best known to Western audiences. He often portrayed a samurai or ronin, who was usually coarse and gruff (Kurosawa once explained that the only weakness he could find with Mifune and his acting ability was his “rough” voice), inverting the popular stereotype of the genteel, clean-cut samurai. In such films as Seven Samurai and Yojimbo, he played characters who were often comically lacking in manners, but replete with practical wisdom and experience, understated nobility, and, in the case of Yojimbo, unmatched fighting prowess.

Mifune’s portrayal of Musashi Miyamoto in Hiroshi Inagaki’s Samurai Trilogy is deliberately made to become the epitome of samurai honour and manners.