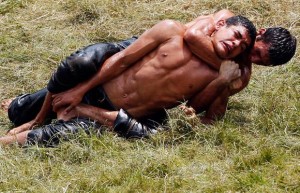 Oil wrestling is the Turkish national sport. It is so called because the wrestlers douse themselves with olive oil. The wrestlers, known as pehlivan wear a type of hand-stitched lederhosen called a kisbet (sometimes kispet), which are traditionally made of water buffalo hide, and most recently have been made of calfskin.

The annual Kırkpınar tournament, held in Edirne in Turkish Thrace since 1362, is the oldest continuously running, sanctioned sporting competition in the world. In recent years this style of wrestling has also become popular in other countries; establishing the most notability in the Netherlands and Japan.