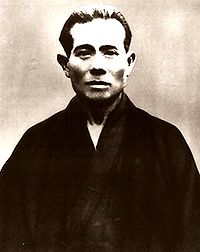 Uechi Ryu is one of the most popular styles of Okinawan Karate-do practiced today. It enjoys not only a large following in Okinawa and Japan, but throughout the world, especially in the United States.

This style of Karate derived from ancient Chinese Pangainoon Kenpo. It teaches in-close fighting, utilizing circular blocks, grappling, and concentrated counter-attacks as a practical way to defend oneself. Uechi Ryu is taught as a disciplined defensive art form, rather than as a competitive sport. The application to daily life is of prime importance where everyone who studies wins.

The founder of Uechi Ryu was Kanbun Uechi, an Okinawan who went to Fuzhou in Fukien Province, China to study martial arts when he was 20 years old. The words “Uechi-ryū” mean “Style of Uechi” or “School of Uechi”.

In contrast to the more linear styles of karate based on Okinawan Shuri-te or Tomari-te, Uechi Ryu’s connection with Chinese Nanpa Shorin-ken means the former shares a similar foundation with Naha-Te (and thus with Goju-ryu) despite their separate development.Thus, Uechi Ryu is also heavily influenced by the circular motions which belong to the kung fu from Fujian province. Uechi Ryū is principally based on the movements of 3 animals: the Tiger, the Dragon, and the Crane.