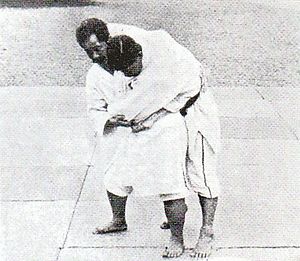 Uki Goshi (floating hip throw) is one of the original 40 throws of Judo as developed by Jigoro Kano. It belongs to the first group, Dai Ikkyo, of the traditional throwing list, Gokyo (no waza), of Kodokan Judo. It is also part of the current 67 Throws of Kodokan Judo. It is classified as a hip technique, Koshi-Waza. Uki goshi is known as a favorite throw of Jigoro Kano himself. It is demonstrated in the Nage no Kata. It used to be much drilled in traditional judo dojos.

In Uki Goshi, tori rolls uke over his hip. Tori’s leading leg barely blocks ukes leading leg and tori is initially slightly sideways to uke rather than completely giving his back. It relies on a high level of skill but can be used more easily against heavier people than O Goshi.