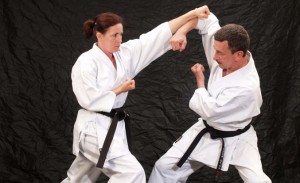 The name Wadō-ryū has three parts: Wa, dō, and ryū. Wa means “harmony,” dō means “way,” and ryū means “style.” Harmony should not be interpreted as pacifism; it is simply the acknowledgment that yielding is sometimes more effective than brute strength.

From one point of view, Wadō-ryū might be considered a style of jūjutsu rather than karate. It should be noted that Hironori Otsuka embraced Shotokan and was its chief instructor for a time. When Ōtsuka first registered his school with the Dai Nippon Butoku Kai in 1938, the style was called “Shinshu Wadō-ryū Karate-Jūjutsu,” a name that reflects its hybrid character. Ōtsuka was a licensed Shindō Yōshin-ryū practitioner and a student of Yōshin-ryū when he first met the Okinawan karate master Gichin Funakoshi. After having learned from Funakoshi, and after their split, with Okinawan masters such as Kenwa Mabuni and Motobu Chōki, Ōtsuka merged Shindō Yōshin-ryū with Okinawan karate. The result of Ōtsuka’s efforts is Wadō-ryū Karate.

To the untrained observer, Wadō-ryū might look similar to other styles of karate, such as Shōtōkan. Most of the underlying principles, however, were derived from Shindō Yōshin-ryū an atemi waza focused style of JuJitsu. A block in Wadō may look much like a block in Shōtōkan, but they are executed from different perspectives.

A key principle in Wadō-ryū is that of tai sabaki (often incorrectly referred to as ‘evasion’). The Japanese term can be translated as “body-management,” and refers to body manipulation so as to move the defender as well as the attacker out of harm’s way. The way to achieve this is to ‘move along’ rather than to ‘move against’—or harmony rather than physical strength. Modern karate competition tends to transform Wadō-ryū away from its roots towards a new generic karate that appeals more to the demands of both spectators and competitors.