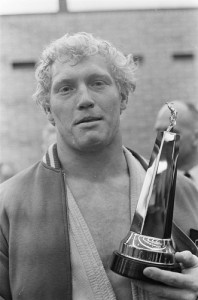 Willem (“Wim”) Ruska (born August 29, 1940 in Amsterdam) is a retired judoka from the Netherlands. During his career in the 1960s and 1970s he won seven European titles, five in the +93kg category (1966-67, 1969, 1971-72) and two in the open category (1969 and 1972). He furthermore won two world titles and two Olympic titles. His success at the 1972 Summer Olympics was overshadowed by the Munich massacre that took place days before. This contributed to the fact that he has not become as famous as his compatriot Anton Geesink.

He also took part in a number of style-vs.-style fights. In August 1976, he defeated Ivan Gomez in a vale tudo match in Brazil. He also faced pro wrestler Antonio Inoki on three occasions. However, his matches against Inoki are believed to have had a pre-determined outcome. Between 1976 and 1980, Ruska competed as a pro wrestler for the New Japan Pro Wrestling and World Wrestling Federation promotions. He had fourteen pro wrestling matches, in some of which he was the tag team partner of fellow judoka Allen Coage. In 2001 Ruska suffered a major stroke which left him physically disabled.