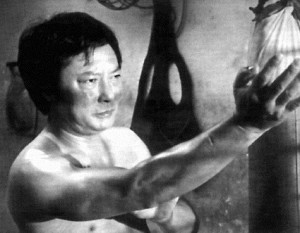 Wong Shun Leung (1935-1997) was a Wing Chun master. He started training with Yip Man at 17, after challenging the master and finding himself completely controlled by him. Already at this age Wong had a reputation as a fighter and Yip Man was at first worried that he would bring trouble for Wing Chun. In fact Wong Shun Leung’s prowess as a “Beimo” fighter helped secure Wing Chun its formidable reputation.

“Beimo” were semi-organised bare knuckle challenge fights between youths in Hong Kong. Wong Shun Leung, who stood only 5′ 6″ tall, fought perhaps over 100 of these challenge fights and was never beaten. He earned the name Gong Sau Wong, King of Talking Hands. Once asked if he was the best fighter in the world he replied “no, only the second best.” When asked who was the best he said “I don’t know, I haven’t met him.”

Wong stayed with Yip Man many years longer than most of the other famous students, helping Yip Man teach and only opened his own school formally in the late sixties. He taught Wing Chun at his kwoon until his untimely death from a stroke. Notable students included Philipp Bayer, Wan Kam-Leung, Gary Lam, Nino Bernardo, David Peterson, Lawrence Leung (Leung Chi Sing) and, of course, Bruce Lee, who later screen tested Wong for an appearance in the ill-fated “Game of Death” and corresponded regularly with Wong on the subject of the science of fighting. In one letter Lee wrote “Even though I am (technically) a student of Yip Man, in reality I learned my Kung-fu from you.”

Following what doctors in Hong Kong described as a ‘subarachnoid hemorrage’ and lapsing into a coma lasting 17 days, wing chun’s “King of the Challenge Match”, sifu Wong Shun Leung, passed away peacefully on January 28th, 1997… he was just 61 years of age. Wong had been with a group of friends at the “Ving Tsun Athletic Association” on Sunday January 12th, enjoying a few games of cards and Mahjong when he complained of feeling unwell.  Soon afterwards he collapsed into a coma from which he never awoke.