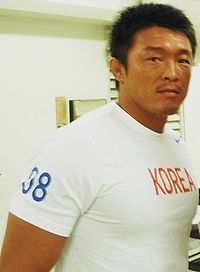 Yoshihiro Akiyama (born July 29, 1975), also known as Choo Sung-hoon, is a Japanese mixed martial artist and judoka. He is a fourth-generation Japanese of Korean descent and acquired Japanese nationality in 2001. He won gold at the 2001 Asian Championships and 2002 Asian Games for South Korea and Japan respectively.

As a mixed martial artist he became the 2006 K-1 HERO’S Light Heavyweight tournament champion. He is currently with the US promotion Ultimate Fighting Championship and was victorious in his first UFC bout against Alan Belcher at UFC 100. He suffered defeat in his second bout against Chris Leben in UFC 116, and his third bout against Michael Bisping in UFC 120.

All three of these fights received “Fight of the Night” honors. He is known for his high level Judo, technical and brawler-like striking, and is considered to have one of the toughest chins in MMA.