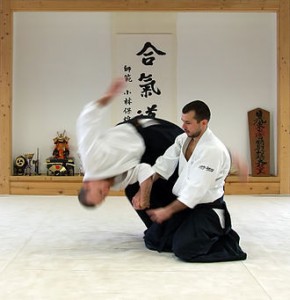 When all attacks are considered, Aikido has over 10,000 nameable techniques. Many Aikido techniques derive from Daito ryu Aiki-jujutsu, but some others were invented by Morihei Ueshiba.

The precise terminology for some may vary between organisations and styles; what follows are the terms used by the Aikikai Foundation. (Note that despite the names of the first five techniques listed, they are not universally taught in numeric order.) Several techniques (e.g. the “drop” throws) are also shared with Judo, which can be considered a “cousin” of Aikido due to their shared Jujutsu background.