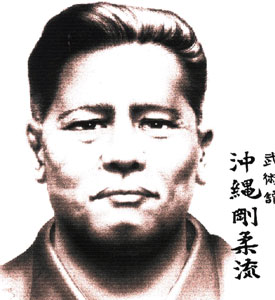 Grandmaster Chojun Miyagi was born on April 25, 1888. He began training in karate under Kanryo Higaonna at the age of 14, in 1902. Like his teacher before him, because of his great natural talent and fierce determination, he progressed very rapidly. The training was severe beyond belief at times but he practiced ever harder with an enthusiasm unmatched by any of the other students. Chojun Miyagi became “uchi deshi” (private disciple) of Kanryo Higaonna. He studied with his teacher for 14 years before his teachers death in 1915.

Chojun Miyagi, as successor to Naha-te pushed himself to the limits of endurance in his desire to emulate the extraordinary skills of his teacher. To this end, that same year (1915) he journeyed to Fuzhou, China the city where his teacher had studied the martial arts, to further his research. This was one of three trips he made to China during his lifetime.

On his return to Okinawa he began to teach martial arts at his home in Naha. Later, he also taught the Okinawan Prefecture Police Training Center, the Okinawan Master’s Training College and at the Naha Commercial High School (where his teacher once taught.)

Chojun Miyagi worked hard to spread karate throughout Okinawa and mainland Japan, and to earn Naha-te a status equal to that of the highly respected Japanese martial arts of judo and kendo. To achieve this he traveled frequently to mainland Japan where he was invited to teach karate at Kyoto University, Kansai University and Ritsumei Kan University. In 1933 karate was registered at the Butokukai, the center for all martial arts in Japan. This was a milestone for karate as it meant that it was recognized on a level with the highly respected martial arts of Japan.

Chojun Miyagi dedicated his whole life to karate. He was responsible for structuring Naha-te (which he later named “Goju-Ryu“) into a systemized discipline which could be taught to society in general. This teaching system which he formulated enabled karate to be taught in schools for the benefit of the young, and to reach vast numbers of people throughout the world. However, his private teaching at his home remained strictly in adherence to the principles and traditions of his teacher, Kanryo Higaonna, and his teacher before him, Ryu Ryu Ko.

The naming of Goju Ryu came about more by accident than design. In 1930, Chojun Miyagi’s top student, Jin’an Shinzato, while in Tokyo was asked by numerous martial arts masters as to what school of martial arts he practiced. As Naha-te te had no formal name he could not answer this question. On his return to Okinawa he reported this incident to Chojun Miyagi. After much consideration Chojun Miyagi decided on the name Goju-Ryu (hard & soft school) as a name for his style. This name he took from a line in the Bubishi ( a classical Chinese text on martial arts and other subjects). This line which appears in a poem describing the eight precepts of the martial arts, reads, “Ho Goju Donto” (the way of inhaling and exhaling is hardness and softness).ù

[From www.spokanekarate.com. Original page is here]