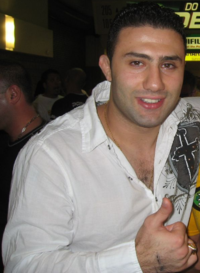 Karapet (Karo) Parisyan (Armenian, born August 28, 1982) is an Armenian-American mixed martial artist. His fighting style is primarily Judo but has been modified to fight without the use of a judogi (sometimes called no-gi style). Karo currently competes for the Ultimate Fighting Championship.

Karo’s family migrated to America when he was six years old. Parisyan started training in Judo when he was nine years old under fellow Armenian Gokor Chivichyan. Parisyan stated that his father began taking him to Judo lessons because he beat up on his sisters, and Judo would be an effective outlet for Parisyan to take out his anger. By age 10, Parisyan was training his Judo under both Chivichyan and “Judo” Gene LeBell. Parisyan later added Muay Thai training and managed to adapt his Judo skills to work in the absence of a judogi.

Karo is considered by many to be the first UFC fighter to have successfully adapted his Judo style to no-gi rules of the Octagon. He has six Junior National belts to his credit, and competed in the Olympic Judo trials ahead of the 2004 games in Athens. Parisyan competes as a welterweight and made his UFC debut on September 23, 2003, beating Dave Strasser by kimura. He was widely considered as the top contender for the welterweight title before a loss to Diego Sanchez.

[From www.fullthrottletv.net. Original page is here]