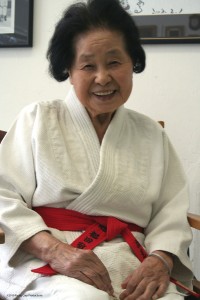 Keiko Fukuda (born April 12, 1913) is the highest-ranked female judo practitioner in history, holding the rank of 9th dan from the Kodokan and the United States Judo Federation (USJF), and 10th dan from USA Judo, and is the last surviving student of Kanō Jigorō, founder of judo.

She is a renowned pioneer of women’s judo, being the first woman promoted to 6th dan (c. 1972), and later 9th dan (2006), by the Kodokan. After completing her formal education in Japan, Fukuda visited the United States of America to teach in the 1950s and 1960s, and eventually settled there.

Fukuda still teaches judo three times each week, hosts the annual Fukuda Invitational Kata Championships, and teaches at the annual Joshi Judo Camp. She has established the Keiko Fukuda Judo Scholarship to encourage and enable women to continue their formal training in the art. Apart from teaching in the USA, she has also taught in Australia, Canada, France, Norway, and the Philippines.Fukuda’s personal motto is: “Be gentle, kind, and beautiful, yet firm and strong, both mentally and physically.”