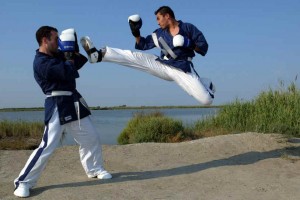 Yoseikan Budo may be classified as a sogo budo form (lit. “composite” or “comprehensive” martial art), but is used here to indicate a martial art into which various martial ways have been integrated. It is probably most widely known for its connection to a pre-war style of Aikido; however, it has important connections to Judo, Karate, Western Boxing and a traditional form of Japanese armed combat known as Tenshin Shoden Katori Shinto-ryu.

The name of the art yo-sei-kan is derived from three Japanese characters, yo meaning ‘teaching’, sei meaning “truth”, kan meaning “place”, which may be translated roughly into English as “the place where the truth is taught” or alternately “place for practising what is right”. The intent of the name was not to assert an exclusive possession of the truth regarding the martial arts but rather to describe how the comprehensive nature of the yoseikan training environment allows an individual to discover their own sense of “truth” by studying a wide range of differing martial techniques, philosophies and principles.

Yoseikan Budo originated in 1931 as the style created by its founder Minoru Mochizuki (1907–2003), a high ranking student and assistant to Jigoro Kano, the founder of Judo and Morihei Ueshiba, the founder of Aikido, in the pre-World War II period. In addition to the very high ranks he held in these arts he was student of one of the oldest styles of traditional Japanese koryu budō, the Katori Shinto Ryu, and studied with various karate teachers including Gichin Funakoshi, the man who brought Karate from the Okinawan islands of mainland Japan.