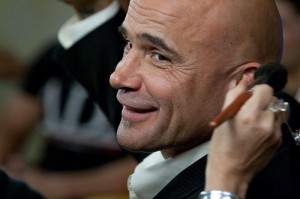 Sebastiaan “Bas” Rutten (Dutch pronunciation: [ˈbɑs ˈrʏtən]; born February 24, 1965) is a retired Dutch mixed martial artist and kickboxer. He was the UFC Heavyweight Champion, a three time King of Pancrase world champion, and finished his career on a 22 fight unbeaten streak (21 wins, 1 draw). Rutten has beaten many MMA champions over the course of his career, including wins over UFC champions Frank Shamrock, Kevin Randleman, Guy Mezger and Maurice Smith, and wins over King of Pancrase world champions Masakatsu Funaki and Minoru Suzuki. He is currently the co-host of Inside MMA on HDNet.

As a fighter, one of his favorite tactics was the liver shot (both punch and kick), and he popularized its use in MMA. Rutten is known for his charisma and has capitalized on his celebrity since retiring from fighting in 1999. He has worked as a color commentator in several MMA organizations, including Pride, and has appeared in numerous television shows, movies, and video games. He also coaches MMA and has authored several instructional materials.