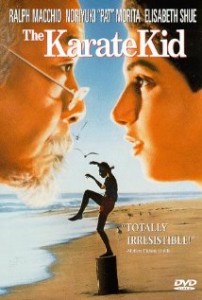 It is a martial arts film, and an underdog story in the mold of a previous success, Avildsen’s 1976 film Rocky. It was a commercial success upon release, and garnered favorable critical acclaim, earning Pat Morita an Academy Award nomination for Best Supporting Actor.

Chuck Norris purportedly turned down the role of John Kreese because he did not want to portray a character that reinforced a negative stereotype of martial arts. Norris disputed this story during a February 9, 2006 appearance on The Adam Carolla Show. Norris insisted that he was not offered the role, and that he was already acting in leading roles at that time anyway.

Additionally, according to the special edition DVD commentary, the studio originally wanted the role of Mr. Miyagi to be played by Toshiro Mifune, but writer Robert Mark Kamen was opposed to that casting choice. Mako was also considered for the role of Mr. Miyagi, but was not available due to prior commitments to film Conan the Destroyer, though he would eventually play a similar role in the film Sidekicks.

The Karate Kid was the first time Pat Morita was credited by his birth name, “Noriyuki”, in decades. Producer Jerry Weintraub asked him to be credited that way so it would sound more ethnic.

The plot: a handyman/martial arts master agrees to teach a bullied boy karate and shows him that there is more to the martial art than fighting.