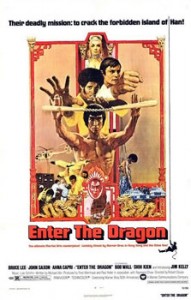 Enter the Dragon is a 1973 Hong Kong martial arts co-production with Golden Harvest and Warner Bros. studios, directed by Robert Clouse; starring Bruce Lee and John Saxon. This is Bruce Lee’s final film appearance before his death on July 20, 1973. Six days after Lee’s death, the film was released on July 26, 1973 in Hong Kong.

In 2004, Enter the Dragon was deemed “culturally significant” and selected for preservation in the National Film Registry. Enter the Dragon was the first Chinese martial arts film to have been produced by a major Hollywood studio – Warner Bros. and was produced in association with Golden Harvest and Lee’s Concord Production Company. The film is largely set in Hong Kong.

Among the stuntmen for the film were members of the Seven Little Fortunes, including Jackie Chan and Sammo Hung. This was arguably instrumental in Chan and Hung’s further association with Golden Harvest studios, which later launched their careers. The portly Hung is shown fighting Lee in the opening sequence of the movie and Chan shows up as a henchman when Lee is discovered inside Han’s underground lair.

The finished version of the film was significantly different from the original screenplay drafts as Bruce Lee revised much of the script himself, including having written and directed the film’s opening Shaolin Monastery fight sequence. Lee wanted to use the film as a vehicle for expressing what he saw as the beauty of his Chinese culture, rather than it being just another action film.