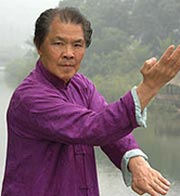 In 1951, at the age of ten, Cheung started his training in Wing Chun Kung Fu under the late Yip Man. According to Cheung, it was from 1954 to 1958 that he was a live-in student of Yip Man and inherited the complete system of Traditional Wing Chun Kung Fu.

William Cheung was also a close friend and senior and training partner to Bruce Lee in the Wing Chun system. He was responsible for personally introducing Bruce Lee to Wing Chun Kung Fu in 1953.

Duncan Leung, a Yip Man student, says it was William Cheung who first made Wing Chun famous in Australia. “In 1957 another early student of Yip Man, William Cheung, immigrated to Australia. On the way there an incident occurred when he locked himself in the sailor cabin and fought more than 10 sailors. This got into all the newspapers and so Wing Chun was even known in Australia then.”

Cheung is known for using “Egg Standing” to demonstrate his skill in weight distribution and overall control of his body.