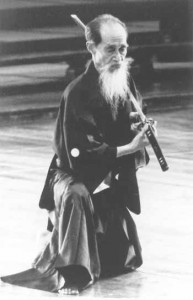 Tenshin Shōden Katori Shintō-ryū is one of the oldest extant Japanese martial arts, and an exemplar of koryū bujutsu. The Tenshin Shōden Katori Shintō-ryū was founded by Iizasa Ienao, born 1387 in Iizasa village (present day Takomachi, Chiba Prefecture), who was living near Katori Shrine (Sawara City, Chiba Prefecture) at the time. The ryū itself gives 1447 as the year it was founded, but some scholars claim circa 1480 is more historically accurate.

The Tenshin Shōden Katori Shintō-ryū is a comprehensive martial system. This means that unlike modern martial ways such as Kendo or Iaido, which concentrate on one specific area of training, study is made of a broad range of martial skills. The main emphasis of the school is on Kenjutsu (sword technique). A wide range of other weapons are being taught as part of the curriculum, but the sword remains the central weapon.